This is a community-run resource to help you fix the Windows Update service on earlier versions of Windows.

Since Windows XP was discontinued in 2014, followed by Windows 7 in 2020, Microsoft’s support for their earlier OSes has significantly dwindled. As XP and earlier don’t officially support modern security improvements, such as the SHA256 hash algorithm required by modern SSL and Authenticode certificates as of 2019, much of the internet has become inaccessible to these devices. Adding insult to injury, Microsoft actively removed many downloads for XP and earlier versions in 2020. In effect, working with these OSes is now incredibly difficult.

Windows Update provides many optional and recommended updates, in addition to drivers for your system, but Windows XP and 2000 can only install critical security updates through the built-in Automatic Updates feature. Legacy Update revives the original Windows Update website - the only way to see and install every update available for your system.

Legacy Update also fixes Windows Product Activation on Windows XP and Windows Server 2003, allowing you to activate these versions of Windows online in seconds, without needing to call Microsoft to activate over the phone (requires XP SP3/Server 2003 SP2).

Legacy Update can be launched from the Start menu, Control Panel, or Install Updates in the site sidebar.

If you encounter errors while trying to install updates, our Windows Update Error Codes list might be useful.

You can uninstall Legacy Update from Add and Remove Programs. 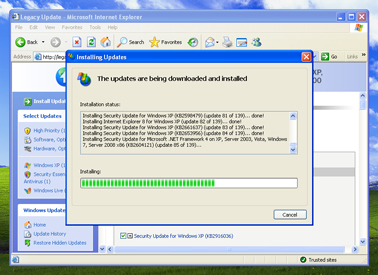 The existence of this site shouldn’t be taken as an endorsement to continue using unsupported OSes. You should stick to a supported OS such as Windows 10 or 11 (or, try Linux?!). However, this service exists anyway in recognition that using these OSes is sometimes necessary to run legacy hardware/software, or just interesting to play around with.

This site is not affiliated with or endorsed by Microsoft. This software is provided “as is”, without warranty of any kind. We don’t believe anything should go wrong, but please ensure you have backups of any important data anyway.

Thanks to the Internet Archve for all they do to preserve information that might otherwise be lost forever. Their extensive Wayback Machine backups of the Windows Update website are what allowed me to successfully create Legacy Update.

Thanks to the countless people on MSFN, BetaArchive, and other Microsoft fan forums for all the little tidbits that helped me get this working.

A very special thank you to those who support me on GitHub Sponsors, and to those who report bugs and help me discover fixes.

The list of Windows Update error codes is from Microsoft documentation.